The Afghan withdrawal has animated the veteran community unlike anything I have experienced in my lifetime. Maybe it’s because I am a vet now, but I feel the calling that many have modeled stepping forward to honor an ethos of leave no one behind, an ethos instilled during our time in service, has driven this uprising.

Through various groups in the area, the Ops Center has been able to provide food and water as well as stoves and other supplies to allies, many who are in hiding.

Amanda “Mandy” Matti is the Battle Captain for the EOA Ops Center in Los Angeles, California. But “Battle Captain” doesn’t quite cover her story, not even a little bit. Her story is filled with many victories and tears to become an essential part of the team. She met her husband, Fadi, in the summer of 2005 in Baghdad where Mandy was stationed with the U.S. Navy. Fadi was the interpreter assigned to Mandy while she was there.

He then handed the phone back to her. Apparently the grandmother recognized the dialect the guard was speaking in, and he was from her hometown. She knew him and his grandmother. So when she was screaming at him. She threatened him with spanking and telling his grandmother if he didn’t let her family through!

To read the full story, click the link below. 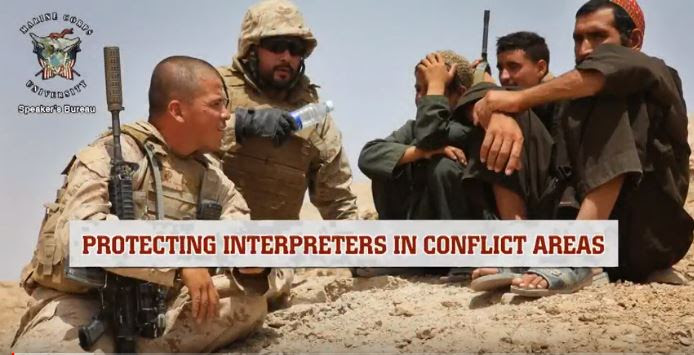 An Afghan interpreter, right, on patrol with 2nd Platoon, Alpha Company, 2nd Battalion, 1st Infantry Regiment of the 5th Stryker Brigade, calls over some local teenagers who were seen moving suspiciously in a tree line on May 8, 2010, in Afghanistan’s Kandahar Province. (JULIE JACOBSON/ AP file) From Luce’s NBC News article, see link below.

2019 has been an exciting year for SPSN. A generous grant from the Smith Richardson Foundation, in 2018, and the continued support from the Pacific Council, No One Left Behind, and many other valuable partners provided SPSN with the opportunity to delve deeper into the strategic challenges and solutions to protect soft networks. SPSN researchers Steve Miska, Rebecca Ash, and Sam Romano pursued a nearly year-long study that culminated in the creation of Soft Networks: Protecting an Achilles Heel of American Influence.

This month also saw us welcome a new researcher to our team for this summer. Jure Erlic is a graduate student at Carnegie Mellon’s Institute for Politics and Strategy and will be housed in the Pacific Council on International Policy in Los Angeles. Please join me in giving Jure a warm welcome.

Thank you for your continued support of our work in strategically protecting soft networks. We look forward to providing further updates on research and policy development efforts processes to protect our closest partners in conflict zones.